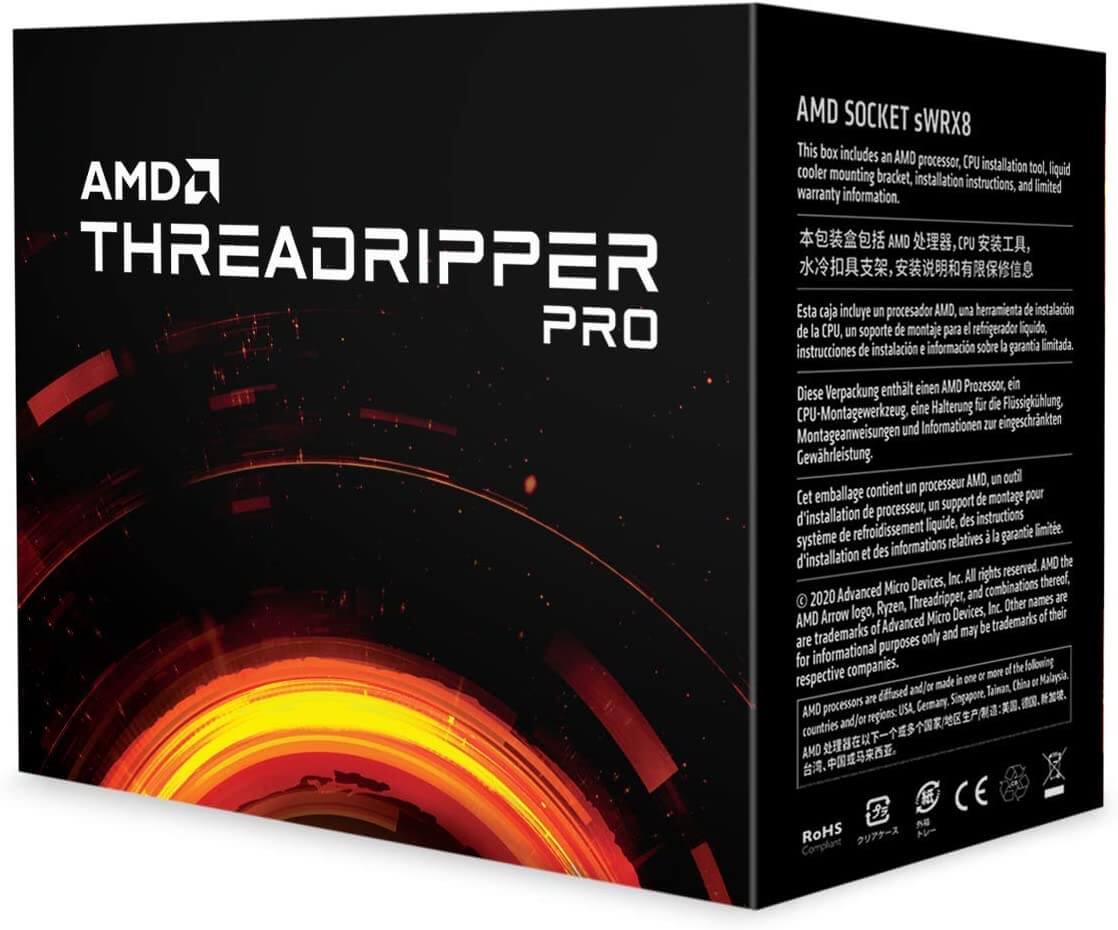 Ryzen Threadripper Pro brings eight channel memory, as well official support for ECC memory to the Threadripper platform. Originally announced in the Summer of 2020, this platform only became available in Spring of 2021. Despite Threadripper Zen 3 (Theadripper Pro 5000x) likely to be announced some time in the second half of 2022, we still think this build will be of value to many looking for a very powerful solver workstation solution right now.

At the time of writing, the estimated cost of this build, configured with 2TB RAM, is $32,000.

This is a 64 core, 128 thread “enthusiast” workstation component. It bares some similarities to the AMD Ryzen 3990x, with it’s Zen 2 architecture, 280w TDP and 64 core count, but there are some noticeable differences. The notable differences for this build are a higher L3 cache of 256MB, which is relevant for processing data quickly in memory, 8 memory channels and support for up to 2TB RAM.

AMD makes no recommendation as to what cooling should be used for the 3995wx on their website, but if we use the 3990x for reference, liquid cooling is the recommended cooling solution for this CPU. The EVGA CLC 360 will provide you with ample cooling performance.

If you prefer an air cooling solution, a compatible cooler that can also sufficiently cool the 3995wx under load is the Noctua NH-U14S TR4-SP3.

Supermicro is a California based IT company. They specialize in servers and high-end workstation solutions, among other products. Their M12SWA-TF motherboard is an e-ATX form factor server-workstation solution for Threadripper PRO that delivers 10G LAN and official support for 256GB RAM modules. This is required in order to run 2TB of RAM in this configuration. Note that there is no WiFi included on this motherboard. So you if would like WiFi, you will have to purchase a WiFi card separately. Regardless, we still recommend this motherboard at this time to users who are seeking a build with up to 2TB of RAM.

This RAM is listed on Supermicro’s website as compatible with their M12SWA-TF motherboard. For a 2TB configuration, you will need 8 modules in total. Always buy in kits if available. This reduces the risk of RAM failure/incompatibilities due to prior testing from the manufacturer for compatibility. For best performance, use at least as many RAM sticks as there are RAM channels available. sWRX8 has 8 channels of memory, so it is recommended that you use 8 sticks of RAM.

If you are uncertain whether you have selected the correct RAM for your build, we would recommend contacting NEMIX directly for assistance.

PCIe 4 NVMe storage. For solver-workstation builds, we recommend to always have at least twice as much storage as RAM in the system. This is so that you can create a save file of any simulations that are currently running, that can be resumed for further calculation in the future. Additional storage needs may vary, purchase as required. For storing larger quantities of data, we would recommend using a NAS (network attached storage device).

This is a large and fairly straight forward to build in case with good air flow. If the design aesthetic is not to your liking, and you would like to select a different case, keep in mind that it should be compatible with e-ATX motherboards.

Seasonic is considered the gold standard for desktop CPUs by many in the industry. This 1000w power supply provides ample power, with some headroom for future upgrades.

This is our current recommendation for a 3995wx solver workstation build with 2TB of RAM. We recognize that this build is very expensive, and mostly only of interest to a small subset of our readers, but a large part of the costs are due to the very expensive 256GB RAM modules. If you do not require 2TB of RAM, a 512GB RAM kit, for example, can be had for approx. $20,000 less, bringing down the total cost to about $12,000.

Please leave a comment below if you liked this build or you have any questions. Also let us know what other builds you might be interested in seeing in the future.